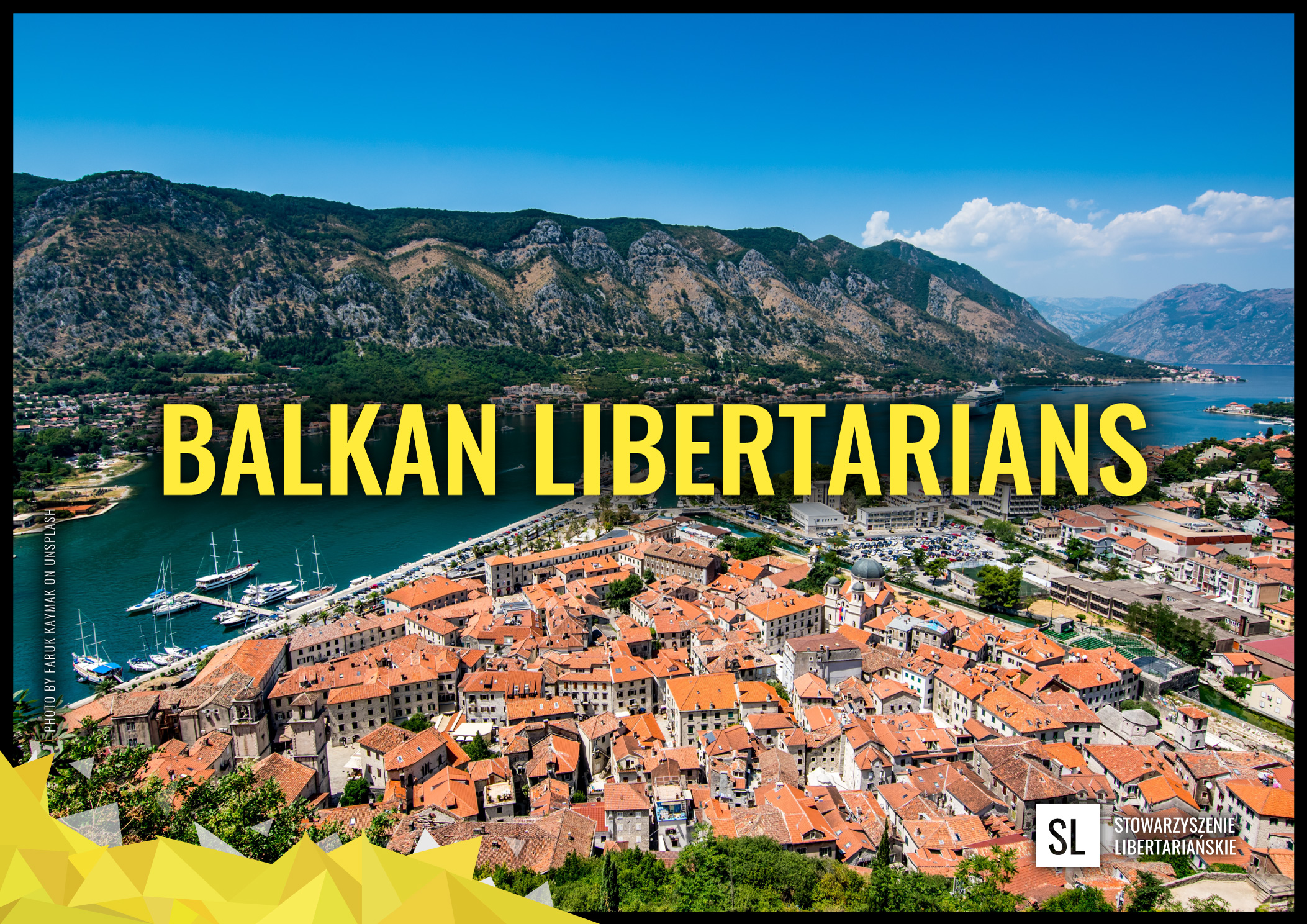 The turbulent past of the former Yugoslavian countries (Serbia, Croatia, Bosnia and Herzegovina, Montenegro, Slovenia, North Macedonia, and Kosovo) leaves its mark on the present. In the past, the region was an arena for competition between European powers, to then be flooded by communism, chauvinist ethnic-nationalisms, widespread Statism, and the general corruption of political life. The post-Yugoslav countries of the Western Balkans ­– excluding the traditionally more developed Slovenia – are still struggling with corruption, unsatisfactory rule of law, constrained press, lack of transparency in public life, and organized crime. The sources of these problems lead us directly to the institution of the state: often bloated, suffering from an excess of regulation, struggling with inflation. Its political class is associated with organized crime and resistant to grassroots tendencies; seeking to maintain power by fuelling national antagonisms, solving artificially created problems, or expanding social spending.

A society polluted with Statism and autocratic political legacy seems to be a difficult area to work whilst promoting the idea of ​​a free market, personal freedom, or the principle of non-aggression. Thanks to short conversations with representatives of the libertarian groups of Serbia, Bosnia and Herzegovina, Macedonia, and Croatia, I learned that they are not only very open-minded but also very creative people, determined to pursue the goal – increasing freedom and reducing the oppression of the state in their country.

Crush the State with Education

The majority of the activities of South Slavic libertarians focus on large-scale educational activities by organizing seminars, lectures, educational programs, conferences, or translating classic books or publishing their publications. On this plane, the Serbian Libertarian Club ‘Libek’ and the Bosnian Civic Association ‘Multi’ are most active, regularly commenting on the current economic issues in the national media. Libertarians associated with Libek analyse economic and legal issues both as the researchers and journalists, especially on the popular portal Talas.rs – established back in 2017. Libek regularly organizes workshops and conferences related to economics, law, and political science with special emphasis on the transformation of the political system and studies on totalitarianism and authoritarianism.

Founded in Bosnian Tuzla Multi started its activity with the publication of the educational film ‘Economy in 60 minutes’ to then move to translate the seminal libertarian books, such as Milton Friedman`s ‘Capitalism and Freedom’ and collected works of Frederic Bastiat. They are also publishing their books, such as ‘Introduction to Objectivism’ and ‘Islam and the Free Market’ – unique reflections on the ethical side of the free market from the Islamic point of view.

Macedonian ‘Libertania’ is an organization with a profile similar to the previously mentioned. Their activists regularly publish on the Libertania blog and edit the academic ‘Journal of Liberty and International Affairs’. Thanks to the work of many people, the association also published Macedonian versions of Tom Palmer’s ‘Why Liberty: Your Life – Your Choices – Your Future’ and ‘The Morality of Capitalism’.

There is a certain level of libertarian success in Bosnia and Herzegovina, as evidenced by the fact that the four largest cities in this country were the birthplaces of liberal or libertarian organizations. The aforementioned ‘Multi’ was born in Tuzla, the ‘Liberal Forum’ operates in Sarajevo, the ‘Business Affirmation Centre’ in Zenica, and ‘The Economists Association SWOT’ in Banja Luka. The most recognizable Multi – in cooperation with the local branch of European Students For Liberty (ESFL) – has organized the ‘Open Fest’, which was the world’s largest libertarian event at the time. Throughout the year, economic seminars and larger educational workshops, such as the ‘School of Liberalism’, are organized regularly. The Liberal Forum engage in inter-ethnic dialogue in Bosnia and set up debates on the political system and systemic reforms of Bosnia and Herzegovina. Libek, in cooperation with the Serbian ESFL, organized the regional ESFL conference in 2015 as well as LibertyCon – both in Belgrade. They regularly conduct economic workshops in the spirit of the Austrian School. Libertania organises local leadership training in schools and a series of economic and law lectures called the “Anti-Authoritarian School”.

An interesting project that combines education with activism is the Croatian organization ‘Lipa – Lower Taxes’. As the name suggests, Lipa is in favour of lower taxes, but also transparency of public spending, reduction of public debt, and limitation of bureaucracy. They have not yet published anything, but their creative online initiatives – and public happenings in the centre of Zagreb – have attracted media attention. ‘The Black Book’ is a register of public money waste, while the ‘Competitiveness Barometer’ is a tool measuring the impact of economic reforms and new regulations of given industries. On their website, you can also find the public debt calculator and the Freedom Day tax calculator.

Education is the main field of activity for South Slavic libertarians. There is a consensus among them that this is the most effective way of promoting ideas at this point, even though they seem to believe that grassroots activity is not enough. Activists of these organizations widely engage in lobbying and political activities. One of my interlocutors – Admir from the Multi – analyses the educational and political topics (especially the totalitarian regimes) for the Atlas Network and is also a candidate in this year’s local elections to the city council in Tuzla. Since 2013, Libek has been organizing an annual taxpayers’ march under the slogan ‘Defend your wallet’. Lipa used the right of the civic legislative initiative by submitting to the parliament a new deregulation draft ‘Let us work’, limiting labour and tax regulations of the small and medium-sized enterprises.

However, the political activity of libertarians in any of the Balkan countries is not focused in any way around the creation of a political party with a libertarian profile. Such a party did not exist in any of these countries, and it is unlikely to be established shortly. ‘There is no need for it. Besides, with little understanding of the idea and with the prospect of receiving a small number of votes, it doesn’t make sense’ says Nikola, an activist in Libertania. ‘We are trying to lobby and transfer the libertarian agenda to other parties’ adds Admir. According to him, Bosnian libertarians collaborated with the social- and the centre-liberal party. The problem, however, is the more social nature of the former and the insufficient scope and possibilities of the latter.

The countries of the Western Balkans generally suffer from a deficit of parties proposing liberal economic solutions. In this respect, the Serbian party ‘Nova’ stands out positively. It had two representatives in the parliament in the previous term (2016–2020). This is just a drop in the ocean of Statism. In Croatia, hopes are linked to the newly found ‘Fokus’ party that advocates reduced fiscal oppression and bureaucracy, however, it has a very limited impact at this point. Political activity is quite limited, which may be a kind of accusation against the movement. Nikola points out that the first thing that should change in Macedonian society, is its mentality: “Instead of waiting for someone’s help, we should think about being responsible for our actions“, only then can we think about the party and serious changes.

This brings us back to a reliable grassroots activity that can change the mentality.

The problems mentioned at the beginning of this article – related to the limited rule of law and the constrained press – are connected with the economics of those states.

The Balkan Leviathans have not fully reformed after the collapse of the socialist Yugoslavia, and they still tangle many areas of life with their statist tentacles. Admir likens the Bosnian state to … an elephant. “In Bosnia, there is no problem with social freedoms. There are no organisations that oppose many of the libertarian postulates, such as the legalization of marijuana. The problem is that an elephant that thinks on an ad hoc basis, seeks political gains in increasing the state and is resistant to any outside voices or opinions.”

The lack of in-depth and large-scale economic reforms is also a huge problem in Serbia, where most of the industry is invariably state-owned. Stefan, who is a local ESFL activist, mentions a whole host of relics of the Miloševic era system. Serbian ‘reforms’ after 2000 have made the subject of privatization a very sensitive issue. ‘When public companies were privatized, they were sold to the organised crime or at least with the principle of cronyism. So today, if you talk about privatization, you have to do it in the right way.’ All the more so as, according to my interlocutor, the government subsidizes investments from foreign investors, while at the same time burdening domestic investors with new taxes and regulations. In turn, state-owned enterprises are subordinated to the interests of the ruling party, promising additional profits for supporting the ruling Progressive Party.

The lack of libertarian unanimity on Euro-Atlantic integration is nothing new. Similarly, in the Balkans, the libertarian community is skeptical about the EU’s Statism and bureaucracy, but they also see a lot of new opportunities in this.

Matko, active in the Croatian ESFL, concludes that his country ‘is the most Europeanized in the region (Slovenia aside)’. ‘We don’t have corruption or transparency problems like the rest of the Balkans, and we benefit from it. At the moment we are beneficiaries of the EU’. Nikola adds that the process of European integration is a form of a threat to the ruling authorities, an additional control mechanism that forces politicians to reform. The benefits of participation in the common market, the elimination of customs barriers, and the freedom of movement are a strong magnet for the inhabitants of statist post-Yugoslav behemoths.

In Bosnia, the European integration is the tune of the distant future. The country, whose constitution is in fact the Dayton peace agreement, is strongly supported by various EU funds. It is also the only federation in this group, which is often presented as a problem – bureaucracy is growing due to the shocking number of 120 federal ministries and constituent parts. Bosnian libertarians, however, are the main defenders of the territorial system of a state divided into a decentralized Muslim-Croatian Federation and the centralised Serbian Republic. In a decentralized Federation, modelled on Switzerland, the local activities and initiatives are much better developed, the beneficiaries of which are the libertarians. In such a structure, better decisions are made also in economic matters.

Libertarians in Bosnia and Herzegovina, Serbia, Croatia, or North Macedonia are not a large group of people – the entire movement in each country is at best amounting to around 100 people. However, their work and determination are inspiring, given the historical baggage that local societies have to carry. A liberal approach to everyday life and a generally libertarian approach to social issues did not go hand in hand with economic freedom, which is a problem not only for libertarians but also for entire Balkan societies.

I wish my colleagues from the Balkans to be successful on the way to expanding the scope of freedom and limiting the role of the state.